So Ripe And Ready To Diminish And Deride

A few months ago a parenting acquaintance, let's call him Warren, asked for a favor. I was not able to help him out as I was in Georgia visiting my very sick father. Warren was pissed I could not fulfill his needs, so he did the mature thing and confronted me in a public space. As he walked towards me, all puffed up like a gamecock entering the ring, he said, "You said you could help me out, now you can't?!" His physical approach and his tone were so upsetting that I did the mature thing and started to cry. Like a fragile flower, I cowered, said something along the lines of "I'm so sorry. It's been such a tough time. I...." When he saw the tears, he responded with, "You are such a fucking drama queen".  And though the setting and the timing were terrible, it was these words - such a fucking drama queen - that hurt the most. I was so mad at myself for apologizing. I APOLOGIZED! I was so angry that I didn't stand up for myself. I allowed that bully to use intimidation and shame to diminish my feelings.

So I did what any good drama queen would do; I told all of my friends, my therapist, strangers on social media, most of my family, my cleaning lady...okay, not her, but you get the point. Because that's how this fucking drama queen deals with her hurt feelings. I told the story to a group of online friends (all women, of course) and asked them what being a drama queen meant to them.

" I believe the approved and appropriate riposte is “Fuck you!" "Next time somebody calls you that, stand up, and take a bow."

I wish I had the moxie to channel my inner Designing Women. 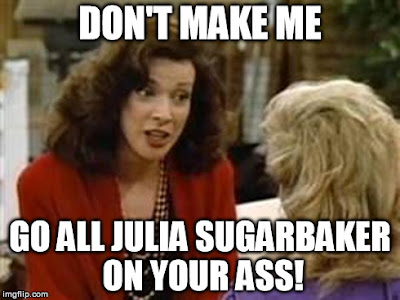 To the more analytical:


"...think about whether the person who is attacking isn't really just defending. Think about what you can meet with compassion instead of defensiveness. If you are secure in whether you are emoting too much or too little or your right to be a human being who sometimes goes too far in one or the other direction, it gets easier not to become reactive under such an accusation."

I agree with these too.  I do sometimes emote too much. There's nothing wrong with that.  The challenge for me is to be secure in my humanness, own my behavior, and not feel I have to apologize for being me. Warren behaved that way because my emotions made him uncomfortable. I am not excusing his caveman-like behavior, but understanding it is the key to not allowing it to negatively effect me. Railing against the Warrens of the world solves nothing. We need to change the narrative. In a perfect world, we would teach our children - girls AND boys -  the value of "letting it out" and help them find the right balance between emotional control and expression. Simple understanding. This is the first step in eliminating the culture of shame on both sides of the emotional spectrum.

Learning To Face The Path At Your Pace

Greetings from the coastal south! I'm in the beginning of my annual summer eat-a-thon, I mean, summer break in Georgia. My son is my traveling companion and he's a super one at that. We drove from Brooklyn to St. Simons Island with very few grumbles from the backseat. Modern technology makes two-day drives far more tolerable than the days of the license plate game.

Anyway...with the whole sick/dying dad thing, I've been a bit distracted but I have a few back surgery/nerve damage updates before I (mostly) unplug for the summer:

April was big month for my new back and me. I had one last follow-up with my surgeon, Dr. Rawlins, who informed me our relationship is officially over. Sad, right? But seriously, I told him how great I'm doing in PT and that my back doesn't hurt and he was all, "You're awesome." And I was all, "I like your accent." And then it got awkward so I asked him to take a selfie with me.

Just kidding! The accent thing happened before the surgery. Really, he told me how pleased he was and that I'm good to go. (He had thought he may want a post-surgery MRI but that was based on how fucked up I was when he first saw me.) He agreed to the selfie if I agreed to write my story for the HSS website. Who could say no to that face?! Here's the story.

The same day I saw Dr. Rawlins, I had another follow-up with Dr. Leung, my neurologist. She too was very happy with my progress. The only thing I still can't do is walk on my heels. Not exactly a life-limiting illness, but an indicator of remaining nerve damage. (I also trip frequently. Especially when I'm tired.) There's still numbness in my shins and "saddle area" but I'm fully functional, for the most part. She tells me to keep doing PT and schedules another follow-up for mid-December, which will be the first birthday of my new back. Upon my telling her that I slowly jogged a mile in March,  she reiterated that I need to be patient (the same advice she gave during my previous visit).  She tells me that I should NOT run at all. She's happy I'm not in pain but reminds me that my back surgery is just a few months old and that ideally I should give it at least a year to fully heal. I begrudgingly oblige. She's absolutely right, and I know it. We didn't take a selfie together.

And last, but not least, I finished my last round of physical therapy sessions at Hospital for Special Surgery. I'm officially doing my physical therapy on my own. My sweet therapist, Lauren told me on our last day, "You don't need me. You just come because you like me." True. And I like having another person holding me accountable. But I have the tools and determination to keep working till these floppy flippers of mine are completely back on line.

Now that I'm "on my own", my network of support is more important than ever. In April I joined Achilles Brooklyn - my local chapter of Achilles International, a community for athletes of all abilities. Michael Ring, a fellow Prospect Park Track Club member, talked me into joining. As I mentioned here Michael has been fighting his way back from Acute Motor Axonal Neuropathy, a rare variant of Guillain-Barré syndrome, which nearly killed him about two years ago. Achilles Brooklyn brought me together with a group of kind people, with varying athletic abilities and/or injuries. We meet every Thursday evening and walk or run the loop of Prospect Park. We start as a group, and we leave the park as a group. Nicoletta Nerangis runs the Brooklyn chapter of Achilles and is the heart of our motley crew. She is a warm and bright spirit that made me feel welcome immediately. It was an absolute thrill to cross the finish line with Michael and Nicoletta at my first Achilles - Hope & Possibility 4-miler last month.


When I walk with my Achilles family, I'm not thinking about my former pace or any of the races I've run in the past. I focus on the joy of being in the moment with a like-minded group of active individuals who accept me, floppy feet and all. I've found a place to heal my body and spirit. My only goal is to keep getting better. I'm so happy to be a part of the Achilles community; I can't wait to pay it forward.