In 1996,  I was 22 years old when I got my first job as a waitress in New York City. I became fast friends with the hilariously funny and bubbly bartender, Stephen. One of the first real friendships I had as a New York City newbie, Stephen looked out for me. He was sort of a surrogate big brother to me. At work he would help me when I got slammed and became too frazzled to maintain my composure while I was frothing cappuccinos in the waiter's station.  He patiently comforted me and listened to me cry for weeks when I got my heart broken by the doofus I believed with all my heart was "the one". (He recently said, "God, I wanted to slap the shit out you". And he probably should've.) And he was the first friend to meet the man who would become my husband. The actual one.

Stephen and I had a lot in common. We both loved Barbies and BOOZE! The love of booze wasn't at all uncommon in the restaurant industry. If you didn't drink and/or "party"...well, you probably didn't work in a restaurant. Stephen and I spent more than a few nights at after-hours bars with our fellow restaurant compatriots. These nights usually resulted in some sort of "it's funny because we're drunk" shenanigans. Like the night I pushed Stephen around the block in a shopping cart while he held a trash-picked 16X20  poster of Jesus and bellowed, "Praise Jesus!"  It was well after 2AM. Yeah, we did stupid stuff...a lot.


In January 2001, I moved in with my boyfriend, and Stephen moved into my old place. It was the last year I saw him. Nothing happened -- we still kept in touch via occasional phone calls -- but we were living different lives, on very different schedules. I got engaged, then married and eventually moved with my husband to Brooklyn. Stephen moved to Florida for some much needed rest, relaxation...and rehab. By the time he moved back to New York in 2007, I was an obese pregnant housewife. Stephen was sober, working and living in Brooklyn, and had become very fit. It was wonderful to know he was doing so well, and frankly, that he was alive!

When I got into the Brazil Butt Lift test group in 2011, I talked to Stephen all the time about my life as a gym rat. He was so excited for me as I grew to love becoming fit. Then, I got him into a test group for Focus T25 and our friendship was reborn! We talked and texted about all things related to fitness and nutrition, and supported one another on our journeys to a healthy and fit lifestyle. On our may daily phone calls, we would laugh at how bizarre it was to be having a conversation about the best way to sooth post-workout leg cramps, instead of post-bender headaches.

In October of 2012, we both registered for the Rock-n-Roll 10K. As I was running, I remembered all the times we spent together during our bar-hopping days, and reflected on how profoundly different our lives had become. I was so excited to be reuniting with him at an event that was the polar opposite of anything we had done in the past.  As I crossed the finish line, I saw Stephen's gorgeous smile for the first time in over 10 years. I ran right into his incredibly toned arms and we started laughing and talking like no time had passed at all.

Since last year's reunion, we've run in three of the same races, including the Brooklyn Half Marathon, which Stephen convinced me to do. He's trying to talk me into to doing a Spartan Race, but I'm not quite ready for obstacles of fire and/or electricity...

When you drastically change your lifestyle, you tend to change your friends as well. I love that Stephen and I have a history which we can laugh about, but not be at all nostalgic for. Instead of pining for the days of watching the sunrise as we crawled out of our favorite bar in the subway, we're excited about meeting up at the next race expo. I don't think anyone that knew us then, would have predicted that either of us would go this direction. Thank goodness for plot twists!

Stephen, I'm so proud of you, and I love that our story gets another chapter!

Well...the girl that hates running has completed her first half-marathon! What an incredible day it was! The weather was perfect and the energy from the runners and the spectators made it so thrilling. The mix of emotions I felt at the starting line were overwhelming. I was just as excited as I was on my wedding day. All the training and planning were over, and it was finally time to go to the show!


The first 6.5 miles of the race were all familiar terrain, as it was the area in and around Prospect Park where I did most of my training. As we exited the park and made our way towards Coney Island, seeing new parts of Brooklyn made it easy to ignore the fact that I was little more than half-way through the race. I was particularly excited as we ran down the on-ramp to Ocean Avenue.


At mile 8, I got the boost I needed to run for another five miles -- my husband and son cheering from the sidelines. My son made a flag that said "Go Mommy". He told my husband that the idea came to him in a dream. How sweet is that! I grabbed my little boy and squeezed him as hard as I could, while he said, "Eww Mommy, you're so sweaty!" It was a perfect moment.

I gave my hubby a sweaty smooch and off I ran, weeping tears of joy but feeling so lifted and knowing that I can accomplish anything! As I rounded the final 400 meters, I saw my boys again which gave me that last bit of energy I needed to run up the ramp to the boardwalk and cross the finish line!


And Cousin Joe was right. I did not finish the Brooklyn Half in under two hours. My official time was 2:07:19. And while my competitive side wishes I had done just a little better, my rational side feels pretty great about that! Because as my friend Val - who ran the race in 1 hour and 38 minutes! - said to me "I think your focus right now should be celebrating. You finished your first half marathon!! Would you have ever guessed two years ago that you could do that?" Not for a second Val. At the beginning of my 12 weeks of training, the longest I had ever run (in my two-year running "history") was 6 miles. In 12 weeks, I trained myself to run 13.1 consecutive miles! And I can't wait to do it again....seriously.

For the Old Kentucky Home Far Away

My husband and I got married on May 1, 2004. When we found out (after the date was set) that it was also Kentucky Derby day, we decided that the groom's cake (I'm from the south. It's a thing we do...) should be in the shape of a mint julep cup, to signify the Derby. What we expected was a sheet cake. What we got was a 3-D monstrosity that haunts us to this day. But it made for a very interesting conversation piece.

Anyway, since our anniversary rarely falls on a Saturday, it became our tradition to celebrate on the first Saturday in May -- Kentucky Derby Day. From 2005-2008 this happened at whatever restaurant/bar we dined. In 2009, our pal Brett invited us to a huge Kentucky Derby party, and a new tradition was born. Hosted by Kentucky-native-turned-Brooklynite, Michael Boyd, this annual party that once was a smallish gathering in his Brooklyn apartment has grown to epic proportions - dude has sponsors - and for the past five Derbys, has been held at Brooklyn's The Bell House.

At post time, they show the race on a giant screen, everyone goes nuts for two minutes, some people win money, then the crowd thins out and the "after party" starts. Three words: Live Band Karaoke. This is one of my favorite events of the party. I love watching, and occasionally (twice) I've been brave enough to take the stage.

But the thing I look forward to the most - besides an excuse to drink during the day - is getting dressed up. And when I tell you people go all out with their derby attire, I mean they go ALL OUT. Fashions and themes run the gamut. You got your hipsters in creatively kitschy homemade hats and vintage dresses. You got your dudes in classic seersucker and bow ties. You got your folks in jockey silks. I saw a guy dressed as horse one year. My husband and I have raised our fashion bar a little higher every year. It certainly has been more fun for me as my size has diminished.


I love this day for so many reasons. It reminds me of what was the happiest day of my life before my son's birth. It gives my husband and me a great excuse to cut loose and act like we did at our wedding reception (there's lots of spazzy dancing) and, best of all, we're home and in bed by 10PM. It's fun and people-with-kids friendly! I've already started shopping for 2014. Giddy'up!

2014 - Our friend Michael didn't have his annual party in Brooklyn this year so we jumped boroughs (and tax brackets) and headed to 11 Madison Park in Manhattan. A swanky time was had by all! 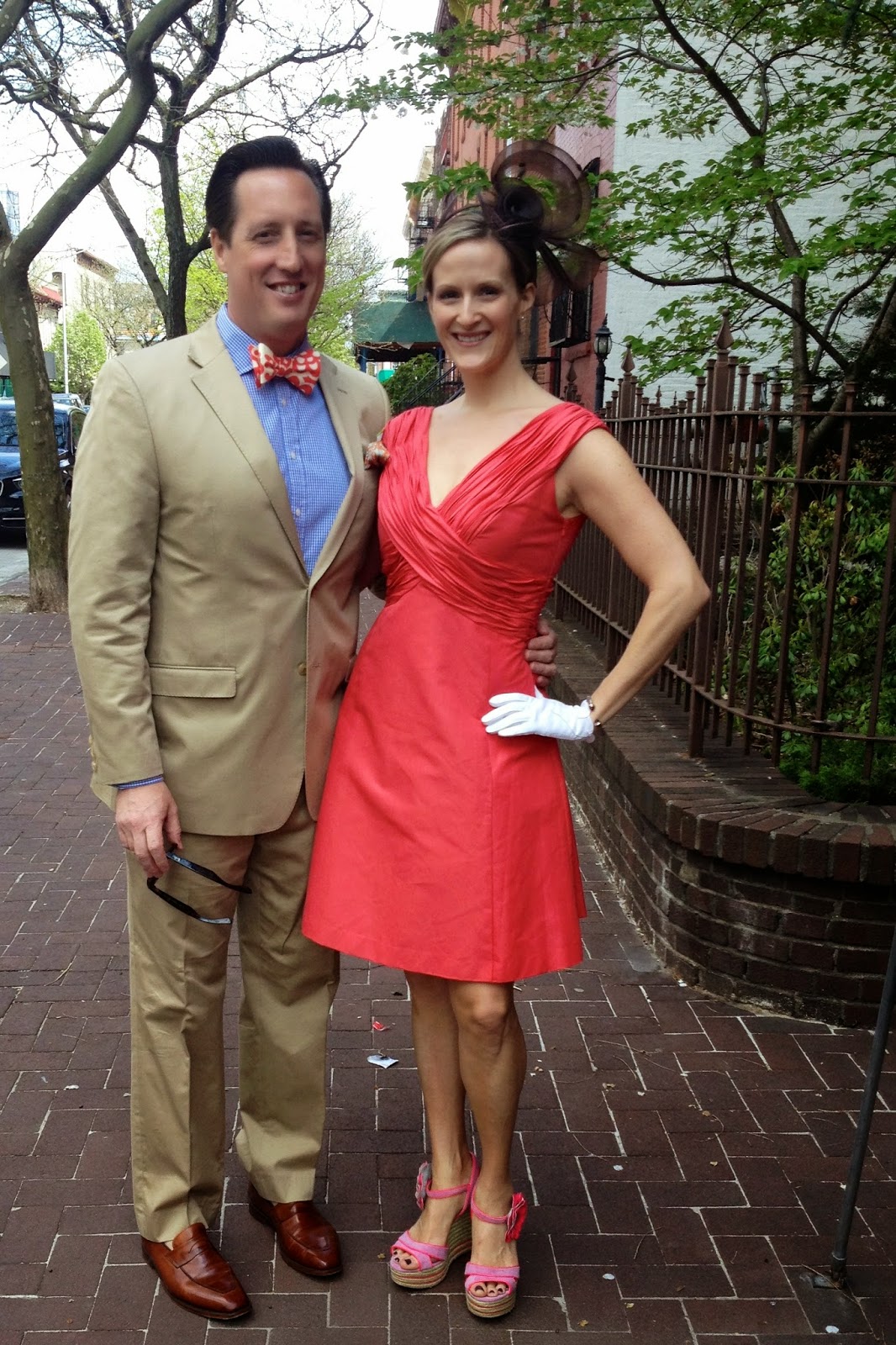 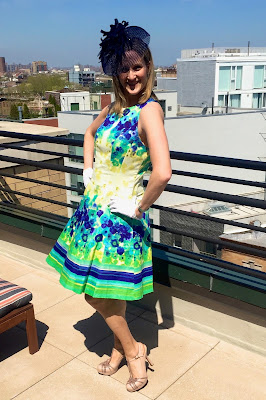