(song: I've Tried Everything/artist: Eurythmics)
DAMN! DAMN! DAMN! I wanted to kick my husband's ass, but that magnificent bastard was just too good!
I started strong. The race looped Prospect Park twice. The entire first loop, I was right behind my husband. I felt surprisingly great. Then came the second loop, and the second climb up the brutally gradual hill at the top of the park. That's when the red cap that had been in my sights for 3.34 miles, started to get farther and farther away. I kept thinking, "He's probably only 30 seconds ahead at this point. Just keep your pace. He'll tire and you'll catch up..." WRONG! Eventually, the red cap was out of view. In the end, he beat me by 1 minute, 8 seconds. My official time for my first 10K was 57:11.
Here's the thing, I did a practice 10K just 5 days before the race. My time was 1 hour and 7 minutes. In five days, I shaved almost 10 minutes off my time! I finished 87th in my division (35 to 39-year-old females) and 1,777th overall. Not bad when you consider there were over 7,000 people running. I feel really proud of what I accomplished. I also really loved competing with my husband! And yeah, I know it's harder to beat men because they're faster by virtue of hormones, genes, muscular structure, blah blah blah. Scientific probability is not going to stop me from trying again. That's right, I'm already registered for my next race. Better keep those quads and hammies loose baby. I'm coming for you!
So I didn't beat my bigger, stronger, husband. I pushed through and achieved another, seemingly improbable goal, which was to finish in under 60 minutes. YAY ME! And I have to say, a 68-second "loss", is not all that shameful. I also finished before my husband's sister and brother, which was pretty satisfying. Especially since I'm almost a decade older than my brother-in-law. Thanks T, for tacking on mass and maintaining your Mac-like dedication to gluttony, so that I can feel good about my little victories. 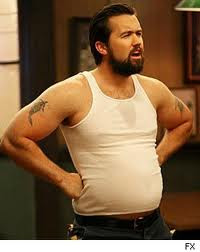