When the World Is Running Down, You Make the Best of What's Still Around.

4.27-30.11 - The last workout and The 60-Day Photo shoot and life after Leandro
Part of the reason I have been absent from blogging, aside from legitimately being busy, is that I had a tough time accepting that the test group was over. My last class on Wednesday was so great and so sad for me. The energy in the room and intensity of the workout were both so high because of the finality of it all. It was an all-weight class, but I was sweating like it was non-stop cardio. When we finished our last set of abs at the end, I looked at the gorgeous blond Australian, whom I've come to know and really like over the course of this test group, and we both started crying. Equal parts sad and relieved that we wouldn't be coming in the next day for a brutal cardio workout. I hugged Leandro and thanked him for choosing me in February and for believing me in a way that I never have. I couldn't say goodbye to Jessica. I knew I'd see her the next day at my photo shoot, and I knew I couldn't talk to her without bursting into tears. She's made a hugely positive impact on my self-esteem and in my physical life. She's been my own personal cheerleader for the past 65 days and I will miss seeing her every day.
Leaving the gym for the last time, was terribly sad for me. I realize how much I love the routine of going to workout 5 days a week. It became like a job that I actually enjoyed. I won't miss the morning commute on the subway, but I will miss the workouts. And although I haven't made many friend in the class, (Not because I didn't want to, but more so that my home life is so different. Not a lot of time to socialize when you have to leave immediately following class to pick up your toddler at nursery school...) the group environment was key in making me push harder. Before this test group, I was content to exercise in the privacy of my home. Now, I need to be in a gym or a park, around other people with like-minded goals. I work harder when others are watching and I have more accountability. I like to pick a person and secretly compete with her or him so that I get the best workout. I'm driven...
Thursday: The first day of not going to the gym for Leandro's class...made me sad. After 48 group workouts at the gym, I felt so melancholy this morning. Like I had no purpose. But since I had my final photo shoot, I did at least get to see Jessica and a few of my fellow test subjects. The first thing to be done when I arrived was final measurements and weigh-in. I managed to lose half a pound since Tuesday's weigh-in, so my official 60-day weight is 143 pounds for a total weight-loss of 21 pounds! Not bad eh?
After Jessica weighed and measured me, I went to the wardrobe lady to don my Target bikini, then it was time to make my triumphant return to the rotating turntable! It's been 65 days since I had my humiliating rotisserie experience, and I can't wait to show the crew how far I've come. (Never mind how far I need to go, but I know there were some day-1 doubters in the room that will be surprised by my progress.) I am greeted by Marc, the director of the the turntable process. He's tall and looks like Sean Connery in the the movie "The Rock" - without the weapon, but he has the swagger of Jeff Bridges in "The Big Lebowski" - without the bottomless white Russian. 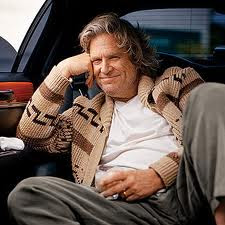 I admit, I have a bit of a crush on him so I'm a little awkward in his presence. And yeah, my husband does read my blog, but he's constantly telling that he's going to trade me in for a trophy wife some day, so he'll just have to deal with my declaration of fleeting admiration for the infomercial director. Maybe when my husband trades me in for a younger model, Marc would like a trophy wife...in her early to mid-40s. One man's trash...
So I take my place atop the rotating turntable and have my much-improved figure, filmed from every angle. It's still pretty mortifying, but less so than the first day. While I was being filmed on the turntable, Leandro walked into the studio. It was so wonderful to see him -  especially because I felt so sad about not being at the gym with my group. He looked so proud, which made me feel great. I felt simultaneous feelings of "Look what you helped me do!" and "I really hope that I get to keep working with you so I can be even better!" After the spinning portion ends, Marc the silver fox does a brief on-camera interview. He asked me a few questions about the program and how I feel about Leandro. I was so overwhelmed with emotions of happiness, excitement, fulfillment, pride...I told him that Leandro has changed my life for the better and I could never repay him for what he's done for me...and then I cried. And then I was dismissed. I changed back into my mom jeans and raced home to fetch my little boy. I left the studio feeling sad but looking forward to the live-taping of our group workout on Monday.
Friday was the first day in 65 days that I didn't go to a BBL-related class or appointment. I FEEL LOST. I feel like a little kid that got separated from the group on a field trip. I'm waiting for the teacher to find me so I can get back to my normal schedule. I wasn't prepared for how empty I would feel after this ended. I think it's a good sign that I would rather be exercising, but it's also a sign that I need to have a gym membership activated, group workouts/classes scheduled and my kitchen stocked with healthy foods so I don't feel like I'm in limbo like I do right now. Friday was also the last day of my daily meals. I felt so empty when I microwaved my rosemary chicken dinner, knowing it would be my last prepared meal from 5 Squares. We got the cookbook in our last delivery and I've vowed to start cooking from it right away.
Saturday started pretty good with my food choices; Protein shake for meal 1, egg white omelet for meal 2, chicken breast for meal 3...then I went to dinner with my husband. Here we are before we went out. God I make him look good right?
It was my first "off program" meal in 67 days (except for the birthday sushi in March) AND, my first drink(s). I gave up booze for the program and haven't had a drop to drink since February 20. Well, it was my anniversary and I celebrated as such. I had hoped to have no more than two glasses of wine - I failed. I had 1 cocktail, 3 glasses of wine and 2 glasses of champagne, spread over a time-frame of 5PM to 12AM. For dinner I ate an asparagus salad that was covered in a delicious dressing that I'm sure was not Leandro-approved. I had an equally delicious steak for dinner. I did NOT have dessert though. Does that count? Although the food was very rich, I ate smallish portions - left a lot on my plate. But the booze...killed me. I regret all those empty calories. I felt so crappy on Sunday. So I ate a bagel with lox spread for breakfast. Once you fall off the wagon, it's hard to drag your ass back onto it.And while my eating habits on Sunday weren't terrible after the bagel start, they weren't nearly as good as they have been with the ease of heating up fresh, healthy meals. I need to start cooking ASAP.
Okay, it's way past this mom's bedtime y'all. Tomorrow I'll tell you all about the live taping we did today. The final individual interviews are tomorrow and Wednesday. This is when we will privately be told our final measurement and given our "maintenance packages" and when they will reveal the winners of any and all prizes. I'm assuming they're doing this so they can film reactions to prizes. I'm still holding out hope for awesome news. It ain't over till the Butt Master says, "No more squats for you!"
Nighty night!