4.24.1 - Easter
Here's the thing - I love candy. Any kind will do. I love the sugar....
Today is Easter Sunday. For the past few weeks, I've managed to avoid coming into contact with a lot of Easter candy. This mostly meant avoiding the local drugstore holiday disays. For his Easter basket booty, I limited my son's Easter candy to one tiny box of Whopper eggs (my favorite), a big lollipop and a plastic egg with Starburst jelly beans. For our at-home egg hunt, I used plastic eggs with small toys inside of them. He loved the toys and I loved not having a ton of candy in the house.

Then we went to my mother-in-law's for Easter dinner. There was evil, tempting sugar at every turn. A three-tiered display tower filled with macaroons and candy. Not one, but two Easter baskets for my son. One from grandma, one from the same aunt that made the delicious macaroons. Grandma's basket is toddler's dream basket of sugary treats - jelly beans, chocolate eggs, more Whoppers, pastel M&Ms, Pez and those horrifying Peeps. There was another egg hunt - only this time the eggs were all filled with the aforementioned candy instead of non-delicious toys. Well, as much as I'd like to lie and say I resisted the urge to steal my son's candy, I WENT CRAZY. It was like I was in candy rehab and some bad friends from my old candy binging days sneaked a bunch of candy past the night nurse. Once I ate that first jelly bean, there was no stopping me. I hit the cookie tower too. Those macaroons never stood a chance. I think I ate four of them. I inhaled jelly beans and M&Ms and the Whoppers...there was no way those things were making it out alive. 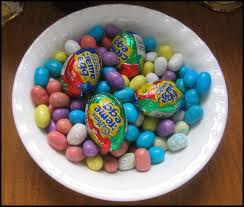 I was okay when I first got there. It wasn't like I was unprepared. I knew grandma would have tons of candy, I knew I'd have to make sure my son didn't eat so much that he would puke. I just didn't know I'd need someone to monitor me so I wouldn't eat so much candy that I'd want to puke.. I needed a sponsor. I should have called Jessica or Leandro to tell them how much I wanted to stuff my face full of candy. Instead I told the voices in my head to take a hike, then proceeded to plow through the jelly beans and chocolate eggs like a newly released candy-prison inmate.

And now I feel disgusting. I lost all self-control. But it tasted so good at the time...

So what did I learn? I learned I need to be stronger around temptation and that will-power sometimes escapes me. I learned that my mother-in-law and I have very different definitions of "not that much" when describing the amount of candy that will be made available. I also learned that too many jelly beans, makes your taste buds numb.
Next year...I'll be Jewish for Easter.
Posted by FORMERLY FAT MOM at 6:55 AM