I'm Only Human. Of Flesh and Blood, I'm Made.

4.6.11 - Wednesday
Hey there and happy hump day everybody! My son is sleeping, my husband is at our condo board meeting and I am sipping my Tazo "relax" tea while counting the seconds till my eyelids slam shut. Life is sweet.
This week is going really well. Monday's class was terrific! We used Bosu stability balls for awesome core and arm exercises. Unlike previous stability balls I've used, these had sand in them so they were weighted. From a standing position, we held them straight out in front of our chests, then squatted, then lifted them above our heads while moving to a standing position. When we hoisted the ball up, the sand spun around the inside of the ball. I felt like I was rehearsing for Cirque du Soleil. 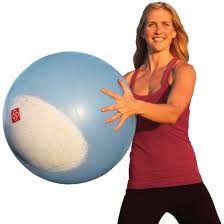 My arms and shoulders were throbbing, but it was so fun and different so I never felt like I was working out. Then we put the ball on the floor behind us, held a 15-pound wight to our chests, squatted onto the ball, leaned all the way, draping the ball, then came up slowly for a killer ab stretch.

After the ball fun, it was time for the squat, split-squats, alternating lunges series - times three. All while holding 30-pounds of weights. At least I knew what to expect. Going forward, Monday, Wednesday and Friday will be weights, while Tuesday and Thursday will be cardio. All five days will have a mat series with ankle weights, however. Our ankle weights are up to 13 pounds each now. We're told they'll be increased to 20! Holy sore butt Batman! After class, I ran for 20 minutes before I had to scurry back to my real life as mom.
Tuesday, for whatever reason, was weigh-in day. ONE MORE POUND means I'm at 148! That's 16 pounds lost, with exactly three more weeks to go.
Before Tuesday's class, Leandro asks us to gather for an announcement. He's really serious and this makes me nervous. I thought he was going to eliminate some of us. Right there in public. Oh my god. Not like this. Please Butt Master, not like this! But instead he tells us that he read our weekly journals yesterday and he noticed that many of us commented that he was "cranky" last week. Oh, sorry about that, but you were kinda cranky last Tuesday and we're supposed to be honest in our journals right? He sweetly apologizes to anyone that took his mood personally (which I never do, I mostly hate disappointing him) and then tells us about some deeply personal things that are going on in his life that he's had trouble separating from when he's teaching. It was so kind of him to open up and share a bit of his personal life with us. He didn't owe us any explanation but it made us all take a step back and see that beneath the toned exterior, Leandro is just as susceptible to human emotions as we are. I wanted to scoop him up and sing him a lullaby. It was a beautiful moment between teacher and students and it set a great tone for our class. It really was brave of him to show his softer side and his vulnerability. Just when I thought I couldn't love the Butt Master any more, he goes and acts all human and pulls me in even closer...
Tuesday's cardio class was awesome! The energy in the room was so positive. It was my best cardio class yet. He kept it a little more dancey and fun, and I was blissfully drenched in sweat by the end. The one move I really hate though, is the one called "shake your booty". We have to stand on our toes and move our arms like we're banging a drum - Rio style I suppose. Then we proceed to, you guessed it, shake our bootys. I hate this because it makes me hyper-aware of exactly how much jiggle my booty is capable of, and it feels a bit like I'm one of those girls in a sexuality explicit rap video. It's not a good look for the jiggly white girl in the Target workout shorts.
Despite the humiliation of that one move, the class was great. I was so revved up when I finished. I raced to picked up my son from school, then came home and did another 45-minute cardio workout. Without the booty shake...
Wednesday:
Leandro was so energetic and spirited today. He obviously feels so much better having cleared the air. His spark is back. Before class he says, "In one week, you're gonna see a big change in your legs and your bum bum." Oh lord, that must mean he's really going to start torturing us now. And he did. Oooo eeee! Today was tough! We did weights today so I knew to expect three rounds of the same squat, split-squat, lunge series. But I didn't know in addition to our usual 15-pound dumbbells, we'd also be wearing our ankle weights. OUCH! Every part of my butt hurts! But every time I looked in the mirror and saw definition beneath the dimples, I pushed a little harder. Man, what a great feeling it is to kill a workout like that! I got 20 minutes of treadmill time - 10 minutes of sideways gallops and 10 minutes of running - then I had to run like wind to make my son's 12:30 pick up.
Tomorrow's a cardio day. I can't wait. Really.
Nighty night!
Posted by FORMERLY FAT MOM at 10:41 PM