You May Ask Yourself, "How Did I Get here?"

3.10.11 - Day 15
Okay, it's really starting to hit me that this is such a huge commitment! Don't freak out, I'm not going to quit. It's just that the whole audition process was so fast and exciting that I didn't really stop to consider certain things like - a sick kid. Tuesday night, my son woke up crying - he's fine now - and it occurred to me, that I have no back-up plan. I felt like such a bad mom, because, as he was wailing and nestled in my husbands arm, I was frantically texting babysitters because I CAN'T MISS LEANDRO'S CLASS! Absence will not be tolerated...it says so right on the packet of info we got on the first day. Lab rats don't get sick days! Luckily, our babysitter was available to be on call, but as it turns out, we didn't need her. My son went to nursery school as scheduled and I went to booty school - completely exhausted. I've been going to bed so early, so it really threw me off when I didn't get as much sleep Tuesday night. I totally sucked in class. It's hard enough on a good night's sleep, but you go on the booty battle field with no sleep, you're worthless.
Last night, thankfully, I had a great night of sleep. I was pumped to go to class today. I arrived early for my pre-class treadmill run. As I'm warming up, I notice someone on the treadmill next to me. It's Leandro. I unplug my earbuds and greet him enthusiastically. First he says,  "I love that smile..." Thank you Leandro! Train me for free forever! Then he's all business. "I want you do the stairs. You gonna get better results." 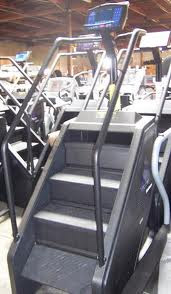 Who am I to say no to the Butt Master? I mount the giant mechanical stair-climber and commence my workout. That thing is really freaking hard! I was dripping with sweat within 5 minutes. I did it for 10 minutes total and climbed 23 floors. Then it was time for class. Ugh!

Despite the exhausting 10 minutes on the steps, I started class with gusto. Today was interval training again. A burst of cardio, then a set of weighted squats or weighted lunges or walking lunges with weights or reverse lunges with weights...you get the idea. Between each set of excruciating weighted lunges, we did some sort of cardio. Running around the room a billion times, squat jumps, his dancey moves. During one of the dancey moves, he comes to correct me for the millionth time. "I tell you many times, hands together! You have to learn, sweetheart." This is when I learn that being called sweetheart by Leandro means...he's frustrated that he's told you 10 times in a row, to keep your hands together. See, Leandro is in fact a former dancer, so he possesses grace. I, however, do not. During one of the dancey cardio sets, he teaches us this hop/ball-change thing, which I screw up royally. He says, "Move like a dancer." (I can hear anyone that's ever seen me dance, laughing as they read this.) He finally just came over to me and said "You do jumping Jacks!" I felt like a loser until he made three other graceless chubbies do the same thing. Thank god I'm not the only one!
He increased the dumbbells to 15 pounds for all the squats. My arms are on fire, but I love seeing the definition develop. My upper body is shrinking rapidly. The lower body, not so much, but we've got 50 more days of this, so I remain hopeful these thighs just might learn to live apart someday.
As we begin the ankle weights leg-lift series on the floor, Leandro says that he wants us to start wearing tighter clothes so he can see our form. "I wanna see you naked." We all laugh. I'm a million miles away from exposing my belly in public. Maybe I can find a tighter $3 tank top at Target, but ain't no way I'm going in there with only my sports bra. Not till my frowny-face belly button starts to look a little happier. We end the class with a brutal set of front and side planks. I thought I was going to rip an abdominal muscle. I had to fall to my knees several times during that fun little series. There was so much groaning in the room. Finally, we got a great cool-down and our release from class. But not before we are told that cuts will be made next week. GULP! Please don't cut me! I have a blog and my 9 followers will be empty without a proper and happy ending to my buttastic journey. Hopefully Leandro sees so much potential in me that he just has to keep me. Fingers crossed...
Just minutes before I sat down to write this entry, we got an email from one of our test-group leaders that said, "Tomorrow would you please arrive to class early for your weigh ins...SURPRISE!" Yep, we're getting an ambush weigh-in. I certainly haven't gained any weight, but I highly doubt I've lost any since MONDAY. As my Jewish pals would say, "Oy vey!" 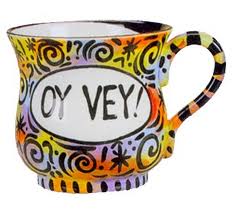